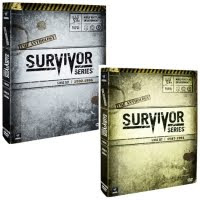 The 2009 Survivor Series is right around the corner, and now you can win an official WWE SURVIVOR SERIES PRIZE PACK here on Let’s Talk Wrestling!

Simply email the answer to the following question to letswrestlewwe@gmail.com

Name the 10 Wrestlers in the main event of the First Survivor Series in 1987 in Richfield, OH

Don’t forget to check out the mega main event at this years Survivor Series – Triple H, Shawn Michaels and John Cena in a triple threat match for the WWE Title!